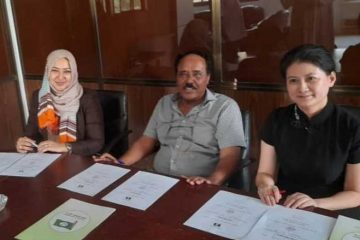 Memorandum of Understanding between the Federation of Chambers of Commerce , the Sudan Shipping Line and the Chinese Green Road Company

The Secretary-General of the Federation of Chambers of Commerce, Wefaq Salah Abdel Aal Mabrouk, explained in a press statement that the memorandum, which aimed to benefit from the opening and operation of a shipping line with the Republic of China, whose inauguration will be celebrated this evening, will facilitate the transfer and delivery of goods and goods to China, and beyond China, to nearby ports such as ( Indonesia, the Philippines, Russia) and other ports, noting that the move would ease pressure on Port Sudan, reduce the cost of exports and facilitate the speed of their arrival to the targeted ports, in addition to facilitating and speeding shipment of goods coming from the same ports to Port Sudan.

Wefaq Salah indicated that it was also agreed that Sudan would be the logistical center for the transit of shipments and goods to neighboring countries and closed non-riparian countries, stressing that the importance of the agreement comes from the fact that it comes at a time when the world is witnessing a clear imbalance in the transport and supply chain due to the Ukrainian-Russian crisis and the significant increase that The cost of shipping has occurred through international shipping companies, pointing out that the agreement will reduce the cost of shipping, which will reflect positively on achieving abundance of goods and merchandise and reducing their prices.